Description #1: As made famous by Patsy Cline, this moving melody struck me immediately the very first time I heard it. My rendition of the piece comes from my musical theatre background. It just felt right for this song, and so, I went with it. 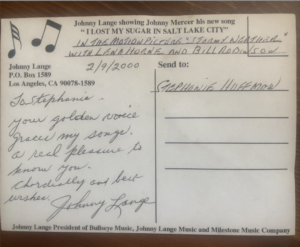 I wish I could remember when and how I found this song, but one thing I know I will never forget was meeting the man who wrote the music! When recording a song, you have to obtain permission. Especially if the song is still owned by the owner or an organization. Then you have to find where the rights are held, and see if you can get a license to record it. This song was one I was determined to track down. And the story behind it is cooler than I could have ever imagined or concocted on my own.

The amazing Johnny Lange penned the tune. Now, you have to imagine, the time I was doing the research was pre-internet. All I had was a phone and the postal service. So it was quite an intense journey. What is so incredible, is that after a long bit of hunting and patience, I not only had the opportunity to speak to Mr. Lange on the phone, to obtain his permission, but had the immense pleasure later of meeting him in person at the retirement home he was residing in Hollywood. I was there on business and was able to make my way to where he was for a short visit. 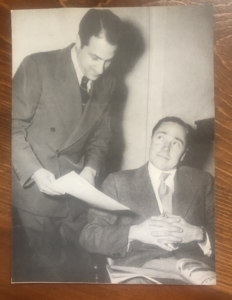 I had sent him the album (which was recorded by then) in advance so that he could approve of my voice and be pleased he had granted me permission to perform and record the song. I was extremely nervous about the coming ciritque. All artists give notes! (Basically a word used to mean their opinion!)

I will never forget that meeting. Not only had he listened to the album, he was ready to let me know his thoughts. I bit my lip. What came next floored me. He not only approved, he loved my voice! Stress fell from my shoulders and I was finally able to relax and enjoy this delightful experience.

He was so complimentary. He couldn’t figure out why he’d never heard of me. I had to laugh, no one had really— if truth be told! I was beyond stunned that he felt my voice was perfect for the song and made his tune sound good! Humbled is not even close to what that memory holds and will always mean.

He was still very spry and cognitive and was insistent on showing me his calisthenics— which he performed from his hospital bed! He had a lot of life in him still at that point, and he wanted to be sure I knew it.

I was beyond thrilled that he not only signed something for me, but gave me a postcard from his days with Johnny Mercer.  Not until years later, and the internet, did I learn that he passed at the age of 100! He was a delightful man, and a gentleman. I am so honored I had the chance to meet him this side of heaven.

There are no reviews yet.

Be the first to review “That Wonderful Someone” Cancel reply