Description #1: This gospel song shares the story of what it was like on that first Easter morning. Can you even imagine? I can’t. But this song sure tries to set that stage and that moment. I know it will inspire your heart. 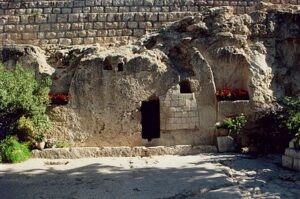 What most people don’t know, is that my first real recording was never released. The songs from those neophyte sessions still sit in a box on three-inch tape buried somewhere in my basement. The younger generation has no idea what that kind of recording even looks like. But it was a thing to be sure. Today, recordings are not physical, they’re only digital. Back in the day, you could tangibly look at it. But what a pain to store!

My first-ever recording experience took me to Iuka, MS. I had previously met some lovely people in a town where I was interviewed and performed once, and they told me about the place and the person who produced albums for people. I was thrilled. My first goal since arriving in Nashville was actually going to happen. I made contact and followed all the next steps and was off and running.

I traveled the 5 hours one-way drive to Country Fox Studios when I could get time off work, and recordded there. The players that showed up at the call of the studio manager literally came out of the woods and they were monster players. It was unreal. Like nothing I could have imagined nor had ever seen before. It was my first introduction to the real Nashville scene. I think it was during one of these sessions that they introduced me to the song titled “Gone”. I’d never heard of it, but when I heard it, I fell in love. It just fit my vocal “chops” as they say. It was such a fun song to not only sing but record. I hope you enjoy it too!

Later on, I would have the pleasure of traveling to Israel and actually visiting the place they have determined as the tomb of Jesus. It was really surreal. All I could do was think of this song and try to imagine that first Easter morning. Hard to imagine for sure.

There are no reviews yet.

Be the first to review “Gone” Cancel reply